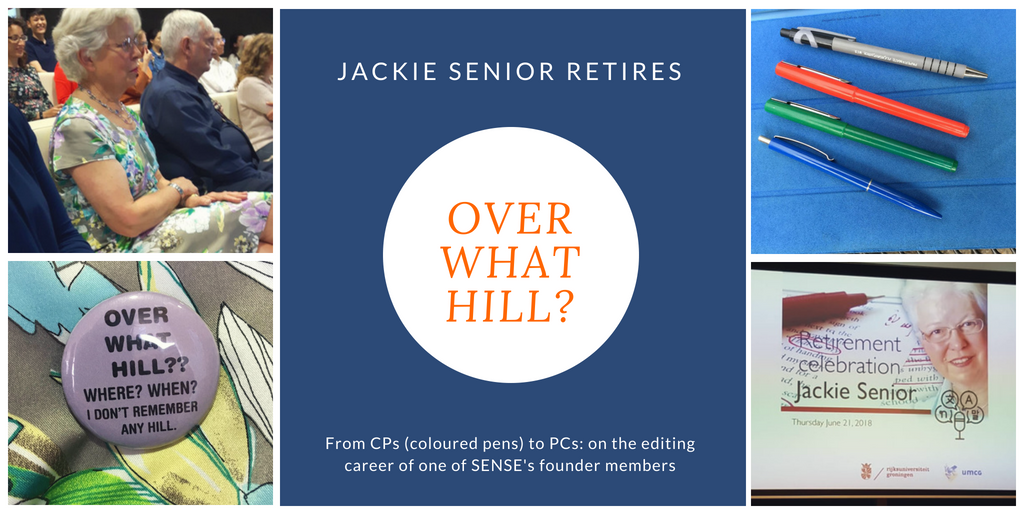 Jackie Senior, a founder member of SENSE, has officially retired. But only from the Department of Genetics at the UMCG in Groningen – not from editing, and certainly not from SENSE. As an occasional editor and translator for the department during busy times, I was invited to Jackie's farewell do at the university medical centre on 12 June. Never one to shy away from a networking opportunity, I accepted the invitation.

The ceremony was held in a seminar room at the European Research Institute for the Biology of Ageing (ERIBA), the building that houses the department. Jackie was surrounded by her four daughters and by colleagues from the genetics departments in Utrecht and Groningen where she helped many a researcher with their grant applications and scientific papers, and many a PhD student with their thesis.

From geologist to freelance editor

I learned that after obtaining a geology degree from Bristol University, Jackie had a brief stint at Elsevier before starting work as a geologist at Shell International in The Hague. As Jackie mentioned in her presentation, she was lucky to be a geologist during a time of major discoveries in the oil and gas industry. And after moving into the investment banking sector as an editor, there was never a dull moment in the years leading up to the dot com crash, as her editing work was always interesting. And now she’s been working in genetics for more than twenty years, witnessing the completion of the human genome as well as all that exciting new technologies have led to in this fast-moving field.

For the younger researchers present, Jackie was keen to point out how editing was done back in 1973 when she started out: with coloured pens and proofreaders’ sheets. It’s hard to imagine now how much time editing a manuscript actually took back then, when all pre-publication processes had to be done by hand and marked-up papers physically transported by post. The digital age has sped this up no end.

Having an in-house editor is worthwhile

Jackie’s position as an editor is rather unusual for a clinical and research department at a Dutch university medical centre, and many researchers consider Genetics a privileged department. Her former boss, Professor Cisca Wijmenga (a winner of the prestigious NWO Spinoza Prize), was the one who insisted that Jackie move with her from Utrecht when in 2007 Cisca took up a position in Groningen. She needed help to make the department an international leader and wasn’t going to be without her editor!

Jackie is convinced that this was one of the key reasons for the department’s continuing scientific success – not only in terms of the numbers of papers and PhD theses that have been published, but also regarding the impact factors of the journals accepting their work for publication. Although Jackie was only planning on staying with Cisca for one year, the reason she ended up staying for 11 was not just her wonderful colleagues, and the research retreats she helped organize, but the sheer amount of work that needed doing.

The never-ending pile of work is also why Jackie is very pleased that the department had the foresight to appoint a younger editor after her retirement: Jackie has been co-working with fellow SENSE member Kate McIntyre over the past five years and Kate is now well prepared to take over.*

Jackie was keen to point out to the researchers listening to her talk what her work involves and how it has contributed to the department’s success. She also talked numbers, explaining why an in-house editor also makes financial sense. For example, if a four-year PhD project in the biomedical sciences costs the university about €250,000 and the PhD student writes four or five papers for publication, the costs of getting those papers edited will only be about 1% of the entire project.

She also pointed out that editing teaches PhD students to be more aware of their use of English and how to express their thoughts clearly and concisely. But editing is not just good for PhD students: an editor can save principal investigators several hours of correcting per paper and allow them to concentrate on the scientific issues raised. After all, says Jackie, ‘scientists and MDs should be scientists and MDs.’

One department’s loss is another society’s gain

Jackie is not planning on resting on her laurels or ‘sitting behind the geraniums’, as the Dutch expression goes. Once an editor, always an editor. She will take on some freelance assignments and get more involved again with her beloved Society. Jackie has made numerous contributions as a volunteer since she helped found SENSE back in 1989 , including positions on the EC as treasurer and chair, and she was made an honorary member in 2010. Now the distractions of her departmental work are fading, we hope she can also be persuaded to become a regular contributor to the SENSE blog!

* Read more on Jackie and Kate’s editing work at the Department of Genetics in an interview in the June 2018 newsletter of the university’s Research School for Behavioural and Cognitive Neurosciences (BCN), in which SENSE also gets a mention. And for readers of Dutch, an article on the significance of Jackie’s work can also be found in the May 2013 issue of Transfer magazine, published by Nuffic (the Dutch organization for internationalization in education).

Sally Hill is an editor and writer for the SENSE blog and newsletter and a British biologist-turned-linguist who runs a business called Scientific Texts.

Read 11149 times Last modified on Saturday, 21 August 2021 22:58
Published in Blog
Tagged under
More in this category: « Blog posts people will want to read SENSE 2018: MET member impressions »
back to top