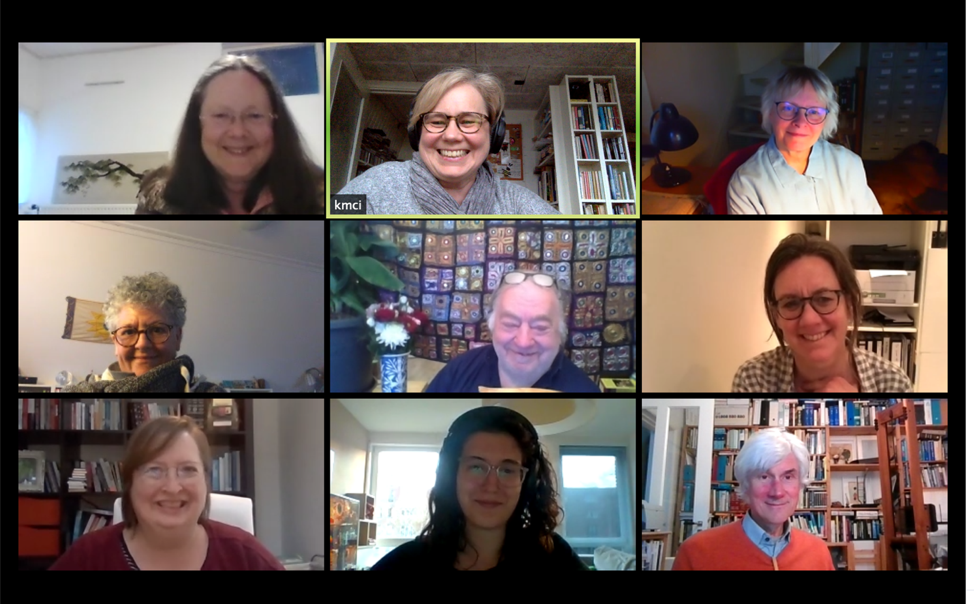 For me, an American child of the 1970-80s, the name ‘Zoom’ will always bring up fuzzy memories of the child-led television program on the Public Broadcasting System. Zoom was a shoestring production, a half-hour compendium of zingy tweens telling jokes and making crafts in a largely bare studio. For British people, imagine a chaotic Blue Peter with much lower production values and no Helen Skelton demonstrating shockingly professional crafts. As a child, I found Zoom maddening, inspiring and occasionally dull. Some segments spoke to my soul. Others dragged on and on.

Modern Zoom retains some of that chaotic energy. Some discussions flow; others are disrupted. It takes time to get used to the medium. There is often a slight lag in sound as people begin to speak that makes discussions difficult. It’s hard to read the body language of all the people in their little boxes on screen, meaning that it’s hard to read the cues about when someone is about to join a discussion.

To combat this disjointed and disorienting aspect, I tend to start Zoom SIG meetings with a check-in from each attendee. I learned to do this at work, where it is a standard element of our management team meetings. Checking in with people’s mental states, even if only briefly, turns out to be a very effective way to defuse tensions. It clears the air before we get down to business. In the context of the Covid-19 pandemic, checking in seems especially crucial. We are all missing human contact in anxious times. It’s important to be professional, but if personal struggles are affecting your ability to work, they ARE professional struggles. Sharing may not solve them, but it can reduce their anxious power.

SIG Far North has had three online Zoom meet-ups since April, and these meetings have seen a progression from substantial upheaval to a new normal.

At the 13 April meet-up, attendees were doing reasonably well work-wise, given the sudden lockdown. The amount of work attendees were getting in varied with their specialization. Those in the legal and financial world were seeing a major slow-down, although there were signs of improvement by mid-April. Those in education and healthcare were working steadily, in some cases on Covid-19-related communications, in others on medical work related to Covid-19. Those who teach were working to shift their work online and meeting the challenges associated with that shift. Everyone mercifully seemed in good health and spirits, whether they were locked down in a cottage on the weide or an apartment in the city. This meeting was also the one where Ragini Werner announced her retirement. You can read more about her career and future plans here. We all wish Gini a wonderful retirement!

By our next meet-up on 29 June, all attendees were doing well with work. Because Zoom allows SENSE members from other regions of the country to attend distant SIGs, we had two legal translators attending (a 100% increase from our usual number). This led to a really interesting discussion about how the need to move legal proceedings online was changing the world for legal translators: from an accelerated online certification system to the sometimes-choppy transition to digital courtrooms. Ammerins Moss-de Boer subsequently wrote about this for the SENSE blog. We also discussed the SENSE online conference. People noted that they had really liked the chat function as a way of posing questions to the speaker, especially being able to ‘like’ questions asked by others. Many had missed the informal face-to-face aspects of the meeting, although the closing Pub Quiz came in for high praise. Some other positive aspects of the online world were noted, including that it was far easier to get PE points and to invite speakers from a greater distance away.

While the June meeting had lower attendance, with nine attendees, it was the first Zoom meeting I have attended with a flowing dynamic. Instead of needing a moderator to make sure that everyone got a chance to speak, each attendee naturally identified a break point in their own story and passed the baton to another member. Once everyone had checked in, the discussion simply flowed. It was a pleasure to host.

By the 31 August meeting, everyone was getting so much work that I had many cancellations and only three attendees. The result was a much less formal meeting, but a good one, with a long discussion about the benefits and drawbacks of online meetings. We eventually fell into a conversation about the current state of America, and whether its individualism and chaotic energy are capable of fostering community.

Not unlike Zoom, in all its incarnations.