Julie Uusinarkaus on revising translations: let it (mostly) be 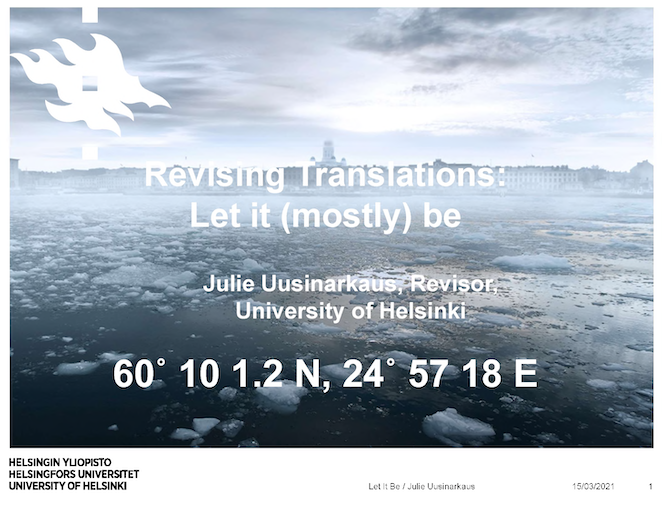 The meeting was convened by Joy Burrough-Boenisch, who welcomed the 29 members who attended the Zoom meeting. Joy introduced the speaker, Julie Uusinarkaus, who works as revisor at the University of Helsinki.

Julie started her presentation with a picture of ice floes in Finland and explained that she works as in-house revisor, academic editor and freelance design editor. The revision at the university involves translated material, very often fairly routine texts such as university regulations, curricula and news releases etc.

There are four in-house translators (Finnish native speakers) and up to ten freelance translators, working as a long-standing team. The official languages of the university are Finnish, Swedish and English, and no language is supposed to take precedence.

Julie explained the revision process, which she described as relatively simple.  The team works in a bilingual Trados interface – we were shown a specimen screenshot of a translation. The translation first comes from the translator, and is then revised by a second translator and a revisor, who carry out two quality checks. The first, done by a second translator, is of the facts and translated vocabulary. The second quality check, which is done by the revisor, is of the readability of the text as a whole from the viewpoint of a native speaker. The original text must be followed as closely as possible and the aim is to have a clear text in the style of the university. The text is then returned to the original translator. A record is kept of all the points of discussion and any compromises. The author has final authority over the text.

The university translation team has its own in-house style; certain stylistic points have been the subject of discussion before agreement was reached, eg, representation of telephone numbers, 24-hour clock and commas after 'e.g.' and 'i.e'.

Julie introduced a number of examples and held a poll for each. The results of the poll were particularly enlightening for us and for Julie. We were given two versions of the translation of a Finnish text and the original Finnish text. Julie pointed out the query points and we could choose which of the two versions we would opt for. Do we accept the edit? Does the edit change the original Finnish meaning? The examples led to a wealth of comments and suggestions in the chat. The last example introduced 300 elk incisors and a garment, and we were asked whether the structure of the sentence should be changed and whether the word 'decorated' or 'attached' was more appropriate. It was illustrative of Julie's presentation and became the subject of a particularly interesting and lively discussion - online, of course.

Read 493 times Last modified on Thursday, 07 October 2021 21:05
Published in Blog
Tagged under
More in this category: « Tech tips: moving to a new computer Tech SIG report: Steven Segaert on GDPR »
back to top