How to quote for jobs: part 3 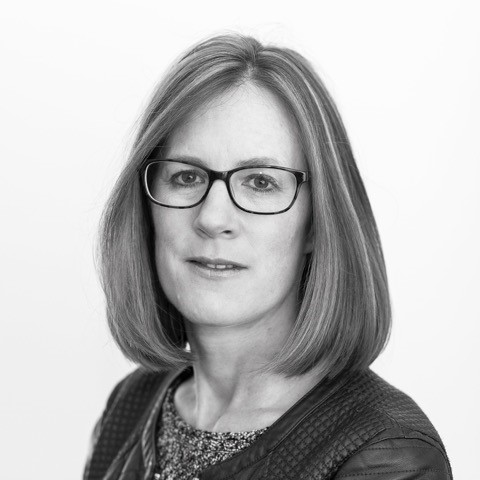 In her previous two articles on quoting for jobs, first published in eSense, Sally Hill discussed how to quote for translating and editing jobs. In the final part of this series from 2016, Sally turned to copywriting jobs.

In a 2016 thread on the [members-only] SENSE forum, members provided useful advice on how to avoid exceeding an estimate for an editing job. Many of us have been in similar situations and it serves as a reminder that taking the time to prepare a quote that anticipates any interim changes or unexpected situations can save you headaches when it comes to invoicing – whatever the job concerned.

What do we mean by copywriting anyway?

For starters, it’s probably handy to define what we mean by ‘copywriting’. In Dutch, a tekstschrijver is not necessarily the same thing as a copywriter since the latter is often considered to apply only to advertising texts. Indeed, Wikipedia confirms for me that copy is ‘a content primarily used for the purpose of advertising or marketing’. So while in Dutch the distinction is easily made, in English there is apparently no term other than ‘writer’ for someone employed or contracted to write texts other than those intended for advertising. In fact, when completing one’s profile for SENSE, the only kind of writing service we can select is ‘copywriting’. I myself have recently started doing some medical writing, which sees me working together with biomedical scientists at a biotech company to write internal scientific reports – a far cry from advertising or marketing. So it would appear that, within SENSE at least, the term ‘copywriting’ includes a broad range of writing assignments.

And what kinds of texts are we talking about?

A brief survey of a handful of the many copywriters in SENSE reveals that clients employ freelancers to write a wide variety of texts. These include brochures, internal corporate texts, conference reports, policy documents, interviews and other articles for company magazines, as well as website texts and expert blogs. SENSE also has a copywriting special interest group (SIG) and a glance at the topics discussed at their meetings tells me that writing for the web is a much-discussed item.

Can you write a brochure for us, Sally?

But let me tell you about my own experience quoting for a copywriting job. Back in 2012, the European Platform (now EP-Nuffic) asked me to write a 5000-word brochure on TTO (tweetalig onderwijs or bilingual education) in Dutch schools1. Since I’d been teaching at TTO schools for several years and had presented at a TTO conference, I was the ideal person for the job they said. They were not put off by the fact that I did not actually have any experience with copywriting; what they needed was a native speaker who understood the system from the inside who could help explain TTO to teachers in other countries. Welcoming the challenge, and not averse to a spot of writing, I accepted the job. But of course they needed an idea of what I would charge – which is where I hit a brick wall and turned to SENSE for help.

SENSE to the rescue

I posted my Forum question on how to estimate the time it would likely take me to write this brochure and SENSE members were most helpful. Although I’d heard somewhere that 4.5 hours per page (100 words an hour?) was a good starting point, I was advised that copywriters never quote in terms of length of finished product (per word or per page) but rather per hour or per day, since the job rarely involves just sitting at your desk thinking up text. Indeed, I would also be meeting up with the client to go through the content, and be setting up and conducting several phone interviews. So the thing to do was to come up with a unit price for each quantifiable part of the job (per meeting or interview) and another for the unquantifiable parts, i.e. X hours of research, Y hours of writing and Z hours per revision round; also bearing in mind that I was likely to underestimate each part and take this into account by giving a range for the total number of hours. This worked out well in the end: thanks to SENSE-ible advice, I raised my original naïve estimate of 28 hours up to 40 hours, which the client was happy with. Although I’ve not been asked to do anything similar since then, the experience did give me more confidence when quoting for courses and workshops, for which I also need to break down the costs involved.

Break the costs down

So a quote needs to include a list of things that you expect to be doing (such as meetings, phone calls, research, interviews, writing, revision rounds) and an estimate of the hours needed for each item, plus expenses such as travel costs and travel time if applicable. Then you need to state what is not included in the quote, what will affect the numbers of hours needed and when you can deliver by (see example below using a template from the internet; click image to enlarge). 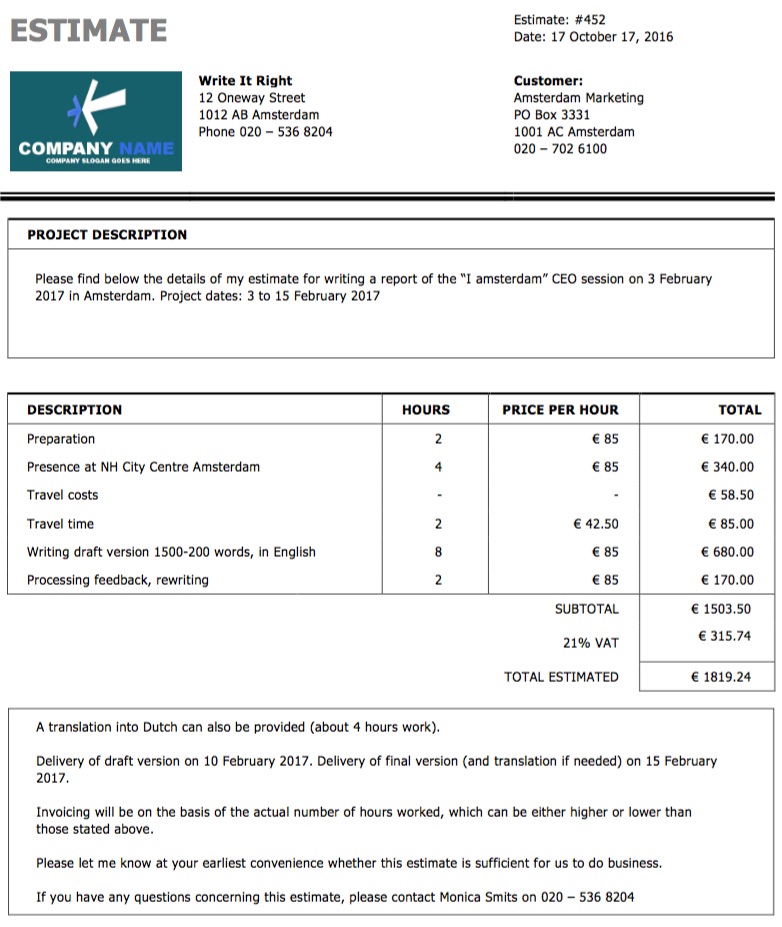 If applicable, I often also state anything the client has agreed to provide me with, and by when, so that it’s down on paper that they must also meet their side of the bargain! For some of his clients, my graphic designer husband even requests a signed copy of the quote be sent to him by post before he’ll even start a job.

These kinds of breakdowns are not always needed though. If you do repeat jobs for the same client it may be more useful to have a fixed price for a press release, or a certain type of article, or a rewrite, with some jobs taking longer than others but averaging out about the same.

It’s in the details

In terms of how long the actual writing part takes, various people have given me their rule of thumb, which ranges from 75 to 200 words per hour. But of course this can depend on so many different factors, including the complexity of the topic, how familiar you are with it, and how much research you’ve done before starting the actual writing. In terms of hourly rates, SENSE’s 2012 rates survey indicates that these vary from €30 to €110 for copywriting. Finally, a factor that should also be considered when putting together a quote is how badly you want the job! After all, topics or clients that are appealing to you may reduce the amount you quote, whereas those that are unappealing may raise it. High-quality clients who pay on time, no questions asked, may well save you time and money in the end. More information on rates, pricing and other resources for copywriters can be found on the website of the Professional Copywriters’ Network in the UK.

And this concludes my three-part series on quoting for jobs. I hope I’ve managed to cover the majority of aspects us freelancers should consider when tackling this tricky task. If not feel free to get in touch and let me know. My thanks for this final article go to SENSE copywriters for their input, including Martine Croll and Carla Bakkum.

1 A PDF version of the finished product, ‘Bilingual education in Dutch schools: a success story’ is available for those wanting to read more.