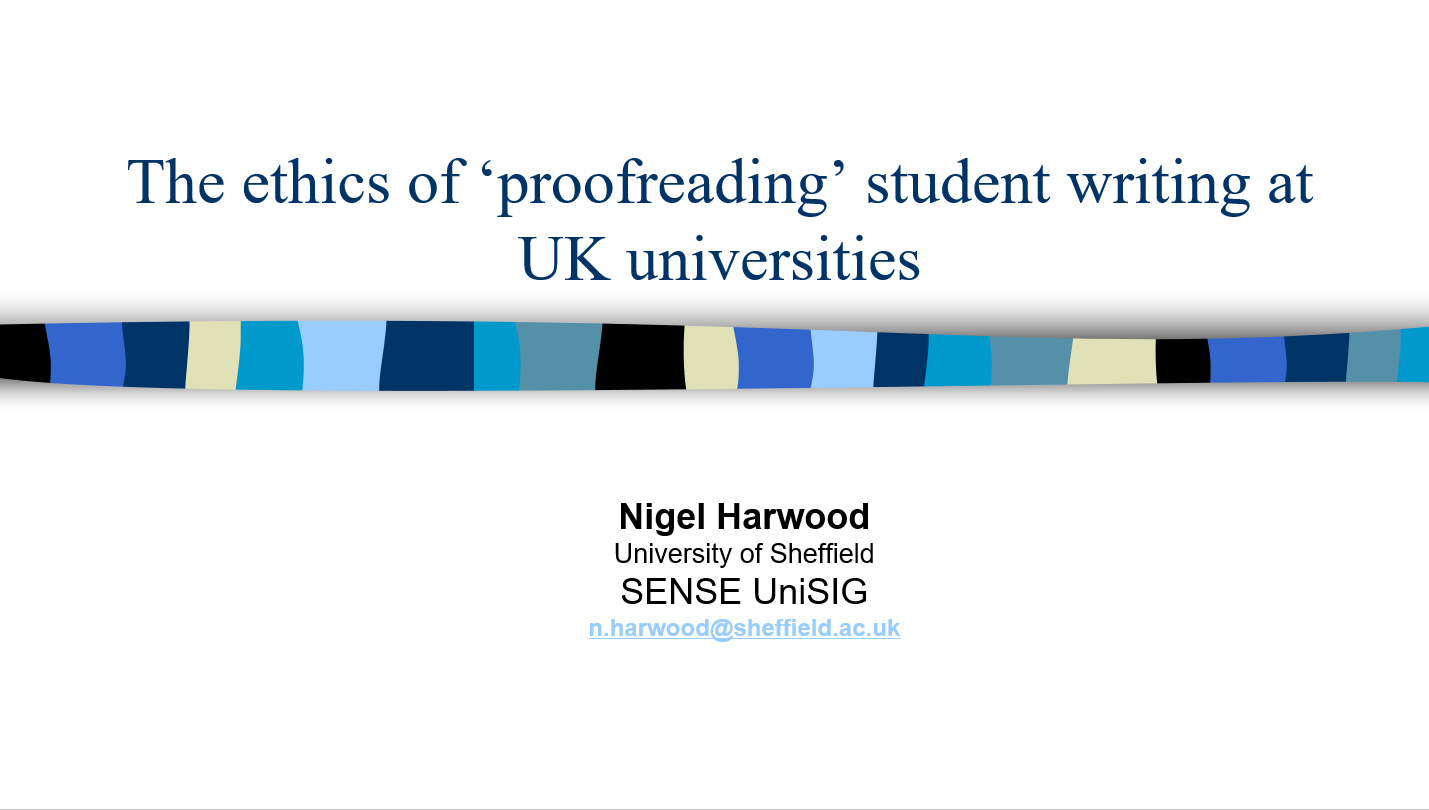 Nigel Harwood, now Professor in Applied Linguistics at Sheffield University, is no stranger to SENSE. In 2014, when we were developing SENSE’s Guidelines for Proofreading of Student Texts, he and Liz Austen came to talk to SENSE about their research on proofreading practices at Essex University and that university’s policy and guidance on proofreading. At the SENSE conference in 2018 he presented his findings on proofreaders’ interventions in a Master’s text, and now he gave us an online presentation on The ethics of ‘proofreading’ at UK universities and reported on his recent study into students’, lecturers’ and writing tutors’ attitudes to proofreading practices.

Nigel explained the outcome of his recent research, which was driven by three questions:

The term 'proofreading' was used to cover a range of interventions including minor/major copy editing, structural editing, content editing, indirect editing, and no intervention. SENSE members raised queries about the definition and Nigel clarified that his terminology was based on his own work and that of Brian Mossop (York University, Ontario). Nigel’s definition – quoted in SENSE’s Guidelines – confines proofreading to student-authored texts by stating that it concerns making changes to ‘assessed work in progress’. After reminding us of this careful wording, he noted that it doesn’t apply to the practice in the Netherlands and elsewhere in mainland Europe of helping PhD candidates achieve publishable articles for their thesis.

To put the results into perspective, Nigel elucidated the findings from the two extreme outliers among the lecturers. The ‘ultra-permissive’ lecturer believed that accessing proofreading intervention was completely acceptable and played a role in inclusivity. Nigel explained that while some students may have access to university-educated parents and well-educated networks they can turn to for proofreading and feedback, access to support via proofreaders and academic editors was a form of equality for those less fortunate. The extreme opposite – the ultra-non-permissive lecturer – believed that no intervention should be allowed, with an inference of cheating. Nigel contextualised this viewpoint by saying the assignments set by the non-permissive lecturer included assessment criteria for language accuracy. Summing up, Nigel pointed out that there was less agreement among the interviewees on how far proofreaders should be permitted to go. His three recommendations on how universities might safely authorise proofreading were to ‘permit only a lighter-touch version of proofreading which eschews content interventions; regulate proofreading by taking it in-house; and allow departments to permit or prohibit proofreading from assignment to assignment, depending on assessors’ aims, outcomes, and assessment criteria.’

One recurrent theme from the research was that ‘proofreaders’ (as defined in Nigel’s research) should not be commenting on or adjusting content. He did concede that some lecturers accepted comments and questions from the proofreader to prompt the author to consider faulty argumentation or missing information. This type of intervention is referred to as ‘editing for educational purposes’ by some universities.

In wrapping up his presentation, Nigel remarked there was still no consensus on how much intervention is acceptable. Some UK universities ban proofreading altogether, whilst others take a non-committal stance. Sheffield University, for example, has placed a blanket ban on proofreading but all students (English native speakers and international) are entitled to six hours of advice from the English Language Teaching Centre. One solution suggested by Nigel was to have ‘in-house’ staff to support academic writers through the university writing centres. However, this would not satisfy university staff who believed any intervention to be unethical and could lead to a return to unseen assessments.

Nigel’s presentation was enlightening and provided a clear message about the perspective of UK universities. We are grateful for Nigel’s time and look forward to hearing from him in the future about other EAP research interests.