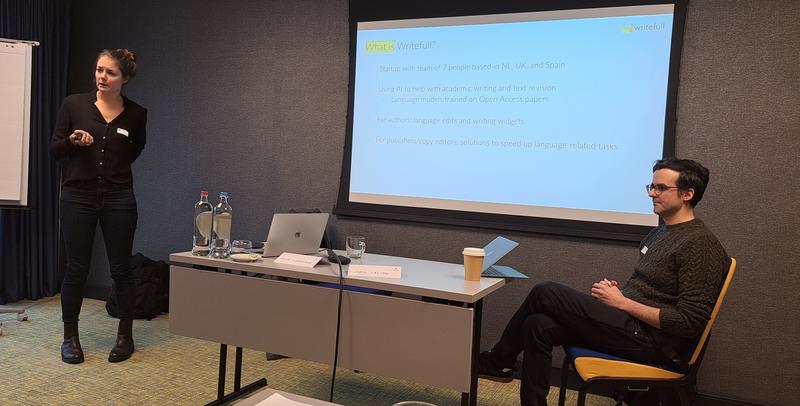 At the 11 November 2022 UniSIG meeting, 12 SENSE members met at Park Plaza Hotel in Utrecht to hear about Writefull from Dr Juan Castro (CEO of Writefull) and Dr Hilde van Zeeland (Chief Applied Linguist). Their presentation focused on the use of artificial intelligence (AI) to revise academic texts, as well as what Writefull can offer SENSE members as an AI-based editing tool.

Writefull’s team consists of seven people based in the Netherlands, the United Kingdom and Spain. According to Juan and Hilde, the software uses language models constructed using hundreds of millions of sentences derived from open-access papers, mainly in the field of bioscience, in order to provide solutions to speed up language-related tasks. Writefull uses natural language processing (NLP) to identify aberrations in typical English sentence constructions (length, word order, word choice, formal/informal, language accuracy and language use). Writefull began as a tool for students and researchers as a means of overcoming language barriers, and it is now used by several editing companies and publishers.

During the presentation, AI was discussed in terms of its merits, but it was also dissected and challenged. Not all editing tools are alike, of course, as PerfectIt, Grammarly, Trinka and others show, and some are more effective than others. We discussed how AI-based language editing may impact the individuality of writing styles.

The presenters noted that AI-based editing tools have uses in different tiers within the industry. For example, Writefull is currently used by publishers as a tool to streamline ‒ and perhaps reduce the need for ‒ human editing, thereby leading to lower overall overhead costs and opening a path to publication for many scholars with lower levels of English, such as Chinese-language authors. According to the Writefull team, their AI-based service can lead to lower immediate rejection rates, higher acceptance rates, quicker acceptance and fewer revision rounds for authors submitting a text to be published in a journal.

After the presentation, several of us had lunch with Juan and Hilde, where we continued to discuss the topic of AI and its increasingly prominent role in editing and translation. Writefull is just scratching the surface of the potential for AI-based writing tools. For example, the future of AI-based editing may include writing models tailored for specific professions; while this is not currently cost-effective, future versions of Writefull may diversify for user-specific writing tools.

UniSIG is grateful to Juan and Hilde for taking the time to show us what Writefull and AI-based editing tools can offer our members, and we look forward to future updates!

Read 126 times Last modified on Thursday, 01 December 2022 11:13
Published in Blog
More in this category: « Training SIG report: first meeting Editing and proofreading – how to get it right »
back to top