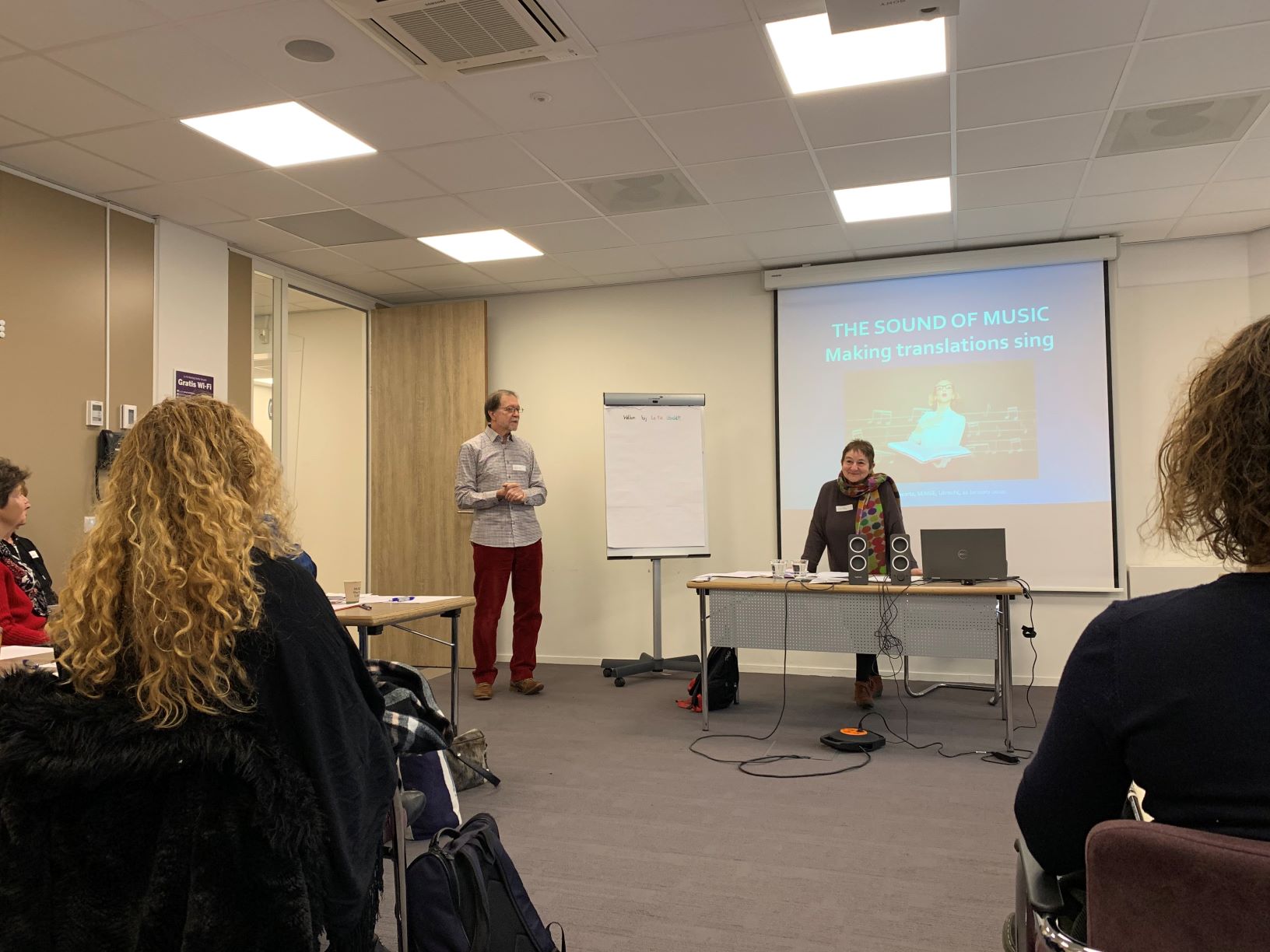 On January 11, 21 translators met in La Vie in Utrecht for an all day workshop on translating from a writer’s point of view. Ros Schwartz has a background as a translator of French literature, but she’s been helping other translators for twenty years, regardless of which language pair they work in. You might think she ought to have some command of Dutch to be leading a workshop about translating Dutch to English, but it didn’t matter. The point of this workshop was to get us past our connection to the source text and see a translation as a self-sufficient English text. That’s what our clients see, after all.

Ros started out with a PowerPoint presentation entitled ‘The Sound of Music – Making translations sing’. It included some general points (know your audience, take a break before doing the final read-through) and some quite specific ones, even down to one word (‘of’’ – couldn’t the ‘minister of finance’ just be the ‘finance minister’?). One of her key ideas is to ‘take ownership’ of the translation – asking yourself what the client wants to communicate and putting that down instead of literally translating. Taken together, these points are a powerful recipe for delivering better translations.

Next we split into groups of four or five to do a short practice exercise based on these points. We worked on a sample translation that was lacking in out-and-out errors but also in oomph, then discussed it with the full group. Each small group then worked on several texts that had been submitted by other participants in advance. These work sessions were illuminating to say the least. As a rule, the submissions were something the translator had found tricky. Although the problems were usually clear, the key to how to make them sing in English was not obvious. Being armed with some of Ros’ insights did make a difference.

At the end of the day, we shared our findings with the full group. Having colleagues pick your work apart can be terrifying. Ros acknowledged this, comparing it to standing naked in front of everybody, and asked that we make our feedback constructive by saying why something didn’t work and how it could be better. The feedback can be confrontational, but is usually well worth it. It’s also sometimes gratifying to hear that there often isn’t one ‘correct’ translation for a particular word, and that opinions differ on what works and doesn’t work.

Sometimes the problem was not a specific word or words but how the information was arranged: a written-out list might serve your audience better as a bulleted list. Sometimes the source text was not good to begin with. Rather than advocating the ‘garbage in, garbage out’ approach, Ros sees these texts as an opportunity for the translator to take ownership and really shine (tip: point out diplomatically to the client what you’ve done).

I think I can speak for all those participating when I say we left with a little more spring in our step and a few more tools in the tool kit!

Read 1031 times Last modified on Saturday, 21 August 2021 23:10
Tweet
Published in Blog
Tagged under
More in this category: « We tolk, you listen 2020 Conference preview: introducing the SENSE presenters »
back to top