GUEST BLOG – Not English, not Dutch, but a language apart Featured

Marianne Orchard muses on the pernickety niggles of being coherent when speaking Dutch or English... or both at once

There’s a wok restaurant with an all-you-can-eat buffet in the next village. The kids love it. It has sushi alongside stuffed eggs alongside huzarensalade alongside loempia’s alongside chicken nuggets alongside babi pangang alongside chips alongside soesjes alongside chocolate fondue alongside lychees alongside ice cream. It’s a Chinese restaurant that caters to Dutch tastes. It’s safe exotic without being too apart, as my mother-in-law would call it. So it’s a Dutch version of Chinese, which means that, in contrast to British Chinese, babi pangang is a standard part of the buffet. The main thing is that there is no meat-and-two-veggery and not a boerenkool in sight.

And I think this is a good light in which to see the version of English that often crops up in the Netherlands, which we native speakers like to laugh at, because it isn’t the English we speak. 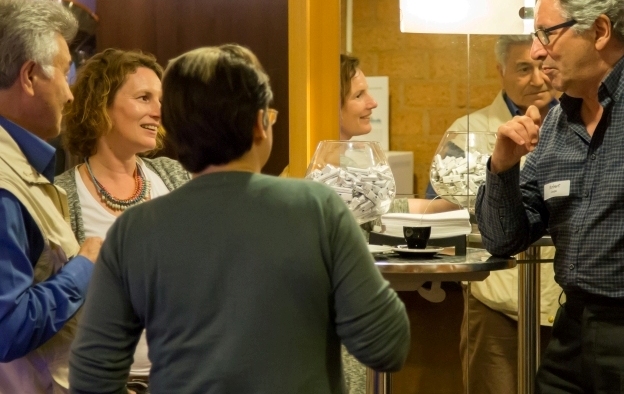 Marianne Orchard (2nd left) schmoozing with fellow SENSE members at a recent Social Media workshop. Besides writing the odd entry for her blog, Like A Sponge, Marianne runs  her business Orchard Text (translation/editing/copywriting) from her home in Leiden

Exotic but not too apart

You know the kind of things; Albert Heijn’s now discontinued Euro Shopper line is a classic at them – ‘Puff pastry with meat filling’ for saucijzenbroodjes, when sausage rolls would be what the British native speaker would say; ‘Short cake biscuits’ for spritsen, when the British native speaker would say Viennese swirls (and the Austrian in turn would probably say something else); and ‘rusks’ for beschuit.

And there’s the insistence, HEMA is a particular offender, in using the term ‘Old Dutch’ when it doesn’t have any significance to native English speakers because we don’t know – and if we do know it’s a sign we’ve been living here too long – that it’s a literal translation of Oud Hollands and for a Dutch person invokes nostalgic images of when life was simpler, when we were less druk, when we wore newspaper trousers and clogs, and when we counted our blessings.

But these products aren’t aimed at the native speaker of English, so it’s none of our business whether it means anything to us because that’s not the point. It’s just like the Chinese restaurant isn’t aimed at Chinese people. It’s about giving a feeling of something being exotic but exotic within reason, exotic that we can understand. 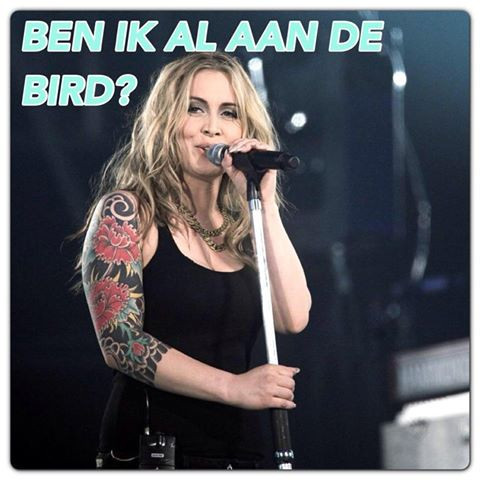 This was just a pernickety niggle compared with the bigger one of what’s going on with all those birds?  My husband solved that conundrum by saying in one of those voices that imply that what he is saying is obvious, ‘It’s a saying: vogels vallen dood van het dak. You say it if it’s really hot. Then it’s so hot that the vogels vallen dood van het dak.’

However, now I’ve looked up the lyrics to the song it still doesn’t make much sense to me. But maybe there are whole layers of meaning that a native speaker of Dutch would understand just as they would understand why you need stuffed eggs and huzarensalade with your sushi. 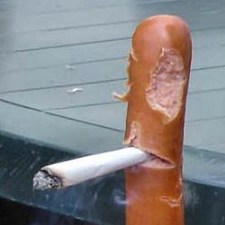 We had rookworst recently. It wasn’t just any rookworst but an ambachtelijke rookworst. As an ambacht is a trade or craft, it would have been a pleasant surprise if Sir Ambachtelijke Rookworst of the Poiesz had been wearing a codpiece and carrying a gourd in true tradesperson fashion (in my anachronistic view of medieval fashion).

But let’s step away from talk of sausages and codpieces before it all degenerates into something unseemly and instead turn our attention to the word ambachtelijk. As I said already, ambachtelijk comes from ambacht, as in trade or craft. So it has the same meaning as the English artisan, as in an artisan bakery. However, it has reached a point in its evolution where if it is being used about rookworst sold in a supermarket we can be sure it doesn’t hold much meaning but is being used instead to convey an emotion.

Our ambachtelijke rookworst ended up looking less than ambachtelijk after it exploded in the pan because I forgot to prick it. Which is symbolic of the word ambachtelijk because it has become so full of meaning that it has exploded and now means nothing. 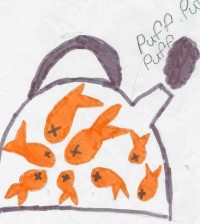 I thought this post could do with some musical accompaniment from the 1980s. So here it is: Words by F.R. David. And, how apt, words not coming easily is the focus of this post. Because they don’t. Come easily. Words, that is. In conversation anyway. Writing is a different kettle of fish because it gives me time to think and revise and think and revise and leave things to stew for a bit. With conversations, though, I find that if I’m speaking English, Dutch words (and the occasional German word, but this is very rare) will jump in and try to clothe my thoughts – a bad metaphor perhaps because it makes it sound as if my thoughts are obscene when they’re probably not obscene enough.

So if we look at the process, a thought forms and it wants to be clothed in some words. Like in that sinister Amazon warehouse in the UK where the workers are treated like robots, the order arrives and the message goes out to the workers that some words need to be picked.

The system and drones in my brain, however, are a lot crapper than the Amazon system. So the order comes in and the workers scurry off without bothering to check whether the product needs to be in Dutch, English or, on rare occasions, German. They scramble and come up with anything in either language that looks like it might just do, often producing a word that doesn’t match the original request anyway. And this is OK if I’m talking to someone like me who functions in both languages, because I can then say things like, ‘Yeah it was the avondvierdaagse last week and it wasn’t too vreselijk and was actually quite gezellig but we’ve got a verjaardag this weekend and that’s going to be really doomy and all oh lekker kopje koffie-ish…’ 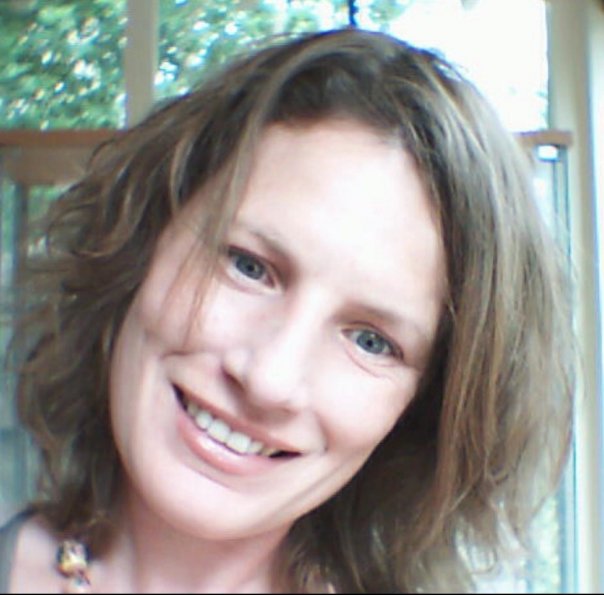 So we actually have our own language, which is neither Dutch nor English but both. And it’s a lot easier to speak than Dutch or English separately. I don’t know how polyglots do it.◄

Marianne Orchard lived for years in Appelscha on the edge of Nationaal Park Drents-Friese Wold, one of the biggest nature reserves in the Netherlands. Not so long ago she swapped rural village life for the wild westen delights of Leiden. These days she is zodanig ingeburgd that she takes her own potatoes along with her on family camping holidays yet she hasn't altogether given up her English roots. She still can’t drink tea without a wolkje melk