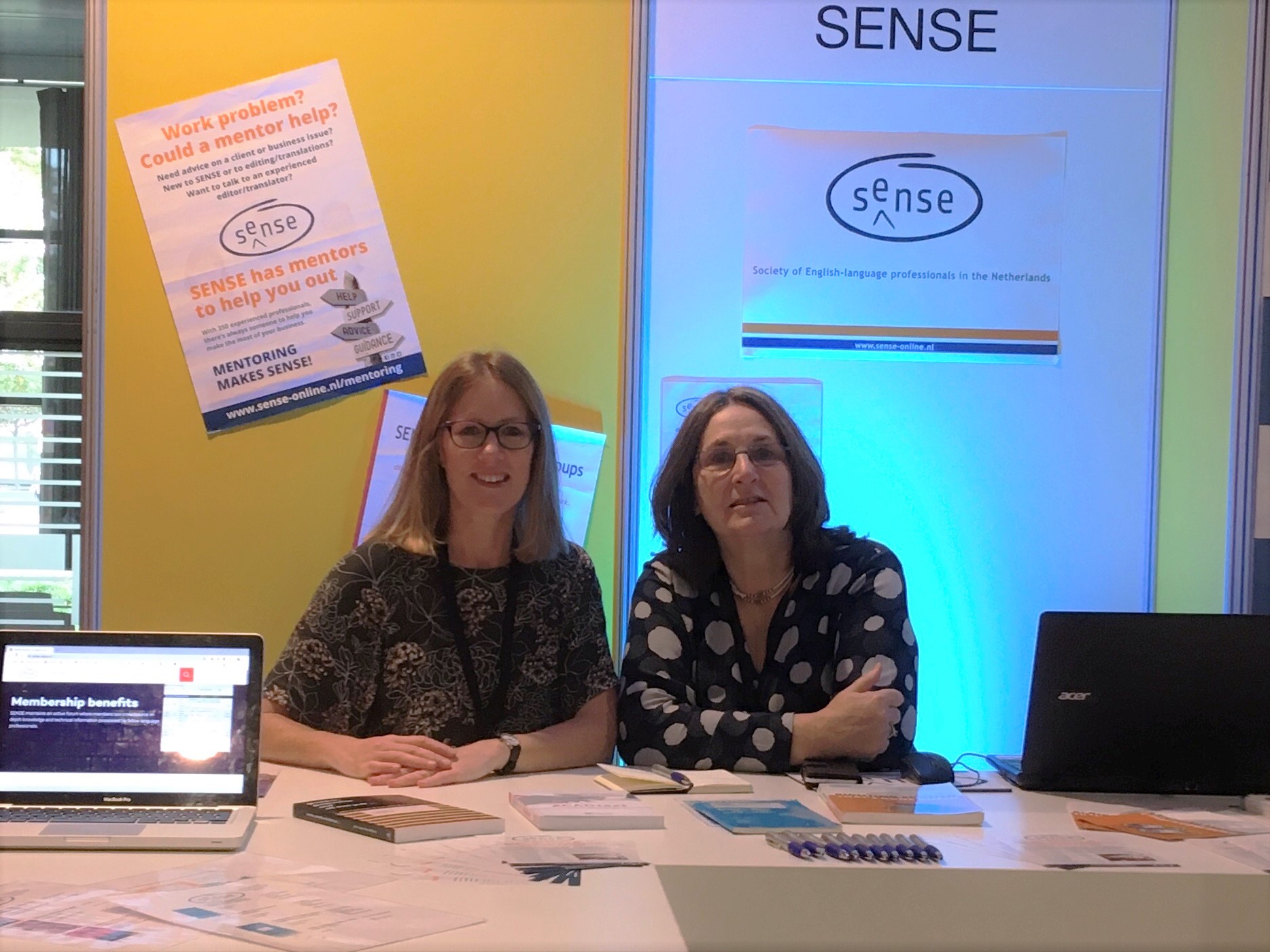 Earlier this year, SENSE decided to book a stand at DRONGO language festival with the twin aims of raising our profile in the wider language community and potentially gaining some new members from the university and allied language communities.

For those of you unfamiliar with the DRONGO language festival, it started out in 2012 as a small afternoon event organized by De Taalstudio and held at Amsterdam Central Library. Since then, it has grown into a two-day event: as well as the exhibition itself, there is a two-day programme of language-related talks and interactive events. This year, DRONGO was held at the Elinor Ostromgebouw at Radboud University in Nijmegen. Our fellow exhibitors included publishers, academic institutions, the Royal Library of the Netherlands, the National Platform for Languages, the Ministry of Education, Culture and Science, developers of interactive educational equipment, the EU and representatives of many language communities, including Esperanto!

From about 08:00, students and teachers started walking past the stands on their way to class, and a number of them showed interest in what SENSE had to offer. Not long afterwards, fellow Friday exhibitor Sally Hill arrived bearing coffee and good cheer. Things really started to liven up from about 10:00; in fact, the SENSE stand had almost continuous footfall for the rest of the day.

We had a great diversity of visitors, but there was particular interest from some course co-ordinators from Radboud itself, from Utrecht University and from ITV: all were looking for English teachers and some for internships for their students. Emma Hartkamp from the European Commission stand came over to talk to us about the problems of recruiting freelance translators for the EU in the Netherlands.

As a number of our members are published authors, we had decided to take some examples of their books along, as well as SENSE publicity materials. As ever, Righting English that’s Gone Dutch proved popular – Joy Burrough’s publisher, who was also at DRONGO, was offering it to SENSE members at an extra special price. Both Lee Ann Weeks and Mike Hannay dropped by and were very pleased to see we were advertising their wares! Unfortunately, it was far too noisy to show the compilation video of Ed Hull’s recent YouTube appearances.

Some of the students who visited the stand stayed to talk to us for quite some time. They were variously full of enthusiasm about the courses they were following, and down in the dumps about their own level of English. At one stage, we felt somewhat like a couple of agony aunts, but we plugged our student membership rate and our mentoring programme, and emphasized the breadth of English-language knowledge available amongst SENSE members!

Mike Gould and Claire Koers, who manned the stand on Saturday, had a much quieter day. However, this did give Mike the opportunity to brush up his knowledge of the Berber language, while Claire attended a crash course in Frisian! During a tour of the stands, Claire also came across Olaf & Giraf, the leading characters in a series of books and other learning materials designed to introduce English to Dutch primary school children in a fun way. Sarah Thompson, the creator of this innovative concept, often goes into schools with her Dutch partner and reads her stories to the children. The main text is in Dutch, but English words or short sentences appear throughout the story, followed by a short explanation of their meanings in Dutch. This is also an ideal tool for parents raising their children in both English and Dutch.

From a personal point of view, my first visit to DRONGO was an extremely enjoyable one. It has that conference feeling in that we were most definitely among kindred spirits. It also threw up one or two unexpected incidents: I happened to mention my continuing difficulty with the correct use of the definite article to a passing Dutch teacher and was given an impromptu and extremely illuminating 15-minute lecture on the subject! It is still early days to say if DRONGO will have proved to be a good vehicle for recruiting new SENSE members, but I am sure we have managed to raise SENSE’s profile a number of language and university communities.

Read 1306 times Last modified on Saturday, 21 August 2021 23:01
Published in Blog
Tagged under
More in this category: « Takeaways from the VZV fall symposium FINLEGSIG meeting on 14 November »
back to top