How to be a monolingual Anglosplaining jerk 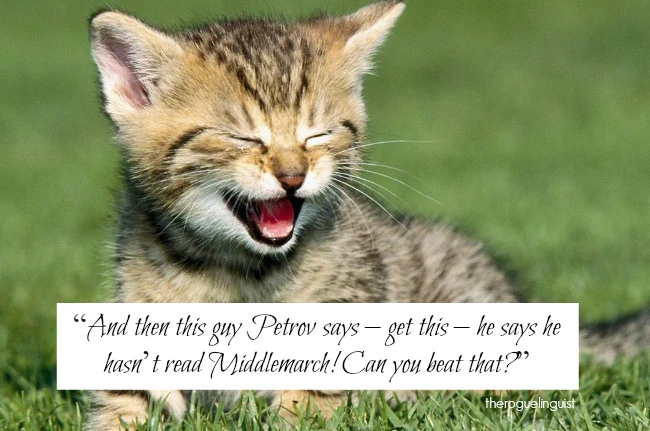 Alison Edwards-Lange aka The Rogue Linguist, is a free-range researcher, translator, editor, writer and lover of tennis, infra-structure and collared shirts done all the way up.

In his book The relocation of English the linguist Mario Saraceni describes getting a bite to eat one night in Luang Prabang, a small town in Laos. The food stall was popular with foreigners and ‘[i]t was normal that there would be about twenty or thirty people of different nationalities eating and talking together. English was used as a lingua franca and conversations were smooth.’ Until a young Brit asked the owner for something. At this ‘[t]he owner looked at his customer with a puzzled expression and asked him if he could speak English’. As Saraceni – himself originally from Italy – continues,

The Englishman, a little annoyed, repeated his request, adding a few decibels to his utterance for the sake of clarity, but still failing to make himself understood by the owner. At that point I decided to intervene and I volunteered to ‘translate’ what the young man was trying to say, and the owner finally understood. My ‘translation’ was not into Lao, but into English.

What was it that the Englishman had such trouble getting across? As it turns out, he wanted nothing more complicated than ‘plain water’. The problem was that he

was using his own local variety of English, popularly known as ‘Estuary English’, and did not seem to be aware that the glottal stop he was producing in his pronunciation of ‘water’ as /wɔʔə/ made the word totally incomprehensible to the owner of the food stall, thus causing the only instance of communication breakdown of that evening. In a world where English ‘native’ speakers haven’t quite cottoned on to the fact that they are now vastly outnumbered by ‘non-native’ speakers (I use the scare quotes deliberately, but that’s another post in itself), it is native speakers who are often the cause of communication breakdowns.

Having never gone through the painstaking process of learning a foreign language, many native speakers lack awareness of the basic accommodation skills that oil the wheels of international communication. And so they simply plough on with the English they grew up with in the Scottish Highlands or out the back of woop-woop in Australia.

So without further ado, here are 10 ways to know if you’re being a monolingual Anglosplaining jerk.

1. You refuse to watch The Bridge because it has subtitles. No, scratch that – it’s news to you that there is anything other than a Gillian Anderson version.
2. You don’t bother to learn basic greetings and pleasantries when travelling, even to places where Hello is … Hallo.
3. When your neighbour Ulrich tells you he’s been sinking about buying some new lederhosen, you have no clue, not the faintest idea, cannot possibly imagine what he might be trying to say.
4. You think of non-native English speakers as having ‘an accent’. Guess what? You have one too! It’s no more possible to have ‘no’ accent than it is to have ‘no’ eye colour, unless of course you’re an anime character.
5. You’re genuinely surprised that not all non-native speakers aspire to sound like you. For many, losing their accent would mean losing a part of their identity. Also, they piss themselves laughing when you say ‘crumpet’.
6. You’re nothing short of scandalised when an idle dinner party conversation reveals that your friend Natalya from Vladivostok – someone you went to grad school with, someone you thought you knew – hasn’t read Finnegan’s Wake. When’s the last time you picked up Крейцерова соната?
7. Having never learnt another language yourself, you have no clue how to accommodate to people who speak it as their umpteenth language. So you alternate between not adjusting your speech at all (‘Bit of a sticky wicket for your lot, eh, these new immigration controls?’) and mistaking being foreign for being severely brain dead (this is formally known as the Steve McLaren).
8. You went on holiday to Myanmar – which was big enough of you already, thank you very much – and when the tea lady in Bagan failed to understand your request for organic marigold loose-leaf tea with soy you sighed and muttered under your breath ‘And of course they don’t even speak English, well isn’t that just perfect.’
9. You find it perfectly plausible that because the Chinese have no past tense, they’re still mad at Japan because it feels like the war is still happening now. So, okay, this one was (unverifiably) attributed to the economist Keith Chen, who is actually bilingual. Still. Also, google him – if you’ve ever wondered what a scrap between an economist and all the linguists would look like, you’re in for a treat.
10. You take the liberty of ‘correcting’ the English of your friend/colleague/classmate Deepa from Delhi. You even imagine she appreciates it. Then she points out that English is her first language too. You Anglosplaining jerk.

This piece was originally published in eSense 45 (2017). A version of this post, including the memes appropriated here, appeared previously on The Rogue Linguist blog.

Read 1193 times Last modified on Thursday, 07 October 2021 21:08
Published in Blog
Tagged under
More in this category: « SIG report: The Southern SIG on the Ides of March How to handle rapidly changing terminology when editing scientific texts: SenseMed meets online »
back to top