Freestyling at the SENSE UniSIG meeting 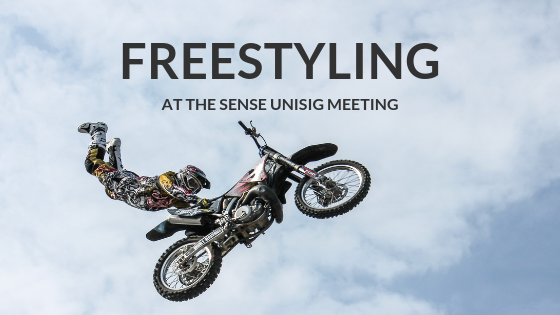 The UniSIG meeting on 9 November was billed as the first meeting of the academic year, but that wasn’t enough to set warning bells ringing. Even when the introductory round started I was none the wiser: our convener asked me to go first as one of two newcomers in the group of 12. Very nice to get away from my laptop and meet some others in the same line of work, I said.

But were they in the same line of work? It finally dawned on me, as the others introduced themselves, that it was no coincidence that everyone seemed to be doing academic editing. This meeting was aimed at academic editors – whereas I mainly do commercial work. But any feeling of being in the wrong place very soon passed.

We met in the breakfast room of the Utrecht Park Plaza Hotel, just off the lobby, as the upstairs meeting rooms were still being renovated. It was a busy afternoon at the hotel, but a flip chart was soon trundled over to us so that our convenor could write down the day’s agenda. Officially billed as ‘Anything and everything’, we would discuss agencies offering thesis editing services, whether or not thesis editors should be acknowledged, editing tools and how to manage – and offer – comments.

The first topic, commercial agencies helping students with their theses, was prompted by a recent article in the Groene Amsterdammer. Some of these flourishing agencies are apparently now also offering undergraduates help on the writing side, and the article grumbled that their services are a form of plagiarism. Those present agreed that students and scientists at all levels, especially non-native English speakers, have poor writing skills in English. They need help – particularly PhD students who won’t be published if their writing isn’t weighty enough – and few universities offer enough support. A possible niche opening for academic editors, our convener concluded.

To thank or not to thank

This led to the second topic – acknowledgement. With rare exceptions, editors are not acknowledged in academic papers. Ethically, it might seem the right thing to do, but most respondents in the recent SENSE survey on the topic said they didn’t mind if their contributions weren’t acknowledged. One member pointed out that they may not want to be associated with mediocre writing – most authors can’t resist making changes before publication to the version delivered by their editor. Another said simply that he doesn’t need the advertising, while another still leaves it up to the client to decide whether to acknowledge him.

This led to a side discussion on what to do about billing to make sure you don’t lose out if editing takes longer because the writing is especially bad. But our convenor managed to turn the focus to topic 3 – how to deal with vague criticism from peer reviewers who don’t accept a version of a paper. The person who had proposed this topic said, ‘They say the English isn’t good enough but don’t go into detail, leaving me guessing what the problem is.’

Asking the journal’s peer reviewers for more information is not an option as they work anonymously, so someone else suggested discussing the situation with the client, which helps build your relationship with them. An alternative suggestion was to arrange for someone else to read the paper and modify it based on their suggestions.

One member said he wasn’t sure if he could charge the client for the time it takes to make such extra amendments, but this was met by a vociferous ‘yes, you can!’ by several people. After all, we cannot guarantee publication. In fact, criticizing the English could be a way for journals to avoid publishing a paper without disclosing the real reason for their decision.

Going off topic only slightly, we discussed what to do with criticism from non-natives along the lines of ‘that’s not English’. These remarks can be hurtful, but it may simply be a case of rephrasing an idiomatic expression or complex construction. One member then handed out copies of some feedback of her own that she had sent to a well-known publisher regarding a poorly translated book. She had agreed to edit it for a certain amount before realizing how much work was involved. Others shared similar experiences. I was reminded to watch out when asked to prepare an estimate based on a short extract. And warned that publishers may seem glamorous but are so cash-strapped they are not good payers.

The last topic of the afternoon was editing tools. The member who proposed the topic was curious about the PerfectIt workshop on 19 October that a couple of attendees had been to and could report back on. He mentioned liking the subscription version of Grammarly for long texts as it ‘takes out the drab’ and reduces the time needed by the reviewers he contracts for editing services. As well as checking for spelling and grammar, Grammarly looks at consistency, suitability within a certain genre, paragraph length and active verbs. Grammarly flags each item and it is up to the user to decide whether or not to accept the suggested change: luckily, we haven’t been made completely redundant yet.

Right at the beginning of the afternoon, our convenor had asked for questions from the newcomers, but we ran out of time. However, she herself answered one of the questions I had about what might motivate an academic editor: ‘I want to give biomedical students a credible voice so they can go and find the cure for something.’

Marijn Moltzer is a freelance writer, editor and translator for clients including Rabobank, Aidsfonds and Cargill.

Read 5031 times Last modified on Friday, 02 September 2022 22:04
Published in Blog
Tagged under
More in this category: « Utrecht Translation SIG: dealing with challenging clients What can we learn from our mystery shopper experiments »
back to top